Filming of a new six part period drama has just begun on Corfu. The series is called “The Durrells” and is based on the memoirs of Gerald Durrell who lived on the island from 1935-1939. Gerald Durrell OBE, was a naturalist and author. At the age of 11, he moved to Corfu with his widowed mother Louisa and his three older siblings, Lawrence, Leslie and Margaret. Gerald was fascinated by the wildlife he discovered on the island and spent an idyllic childhood studying them. Sadly the outbreak of war resulted in the family returning to England. Gerald recorded his experiences on Corfu in a trilogy which includes the much loved “My Family and Other Animals”. These experiences inspired his life’s work to rescue animals from the brink of extinction.

The Durrell family lived in several different homes on the island, the most famous of these being “The White House”, home of Lawrence and Nancy Durrell. “The White House” is owned today by Tassos Athenaios, whose grandfather originally rented the cottage to the Durrells. It is in an idyllic position, perched on the edge of the sea in Kalami bay. The top floor is available to rent as an apartment and the ground floor is now a popular taverna. From the coastline, as you move inland through the ancient olive groves and shepherd’s pathways that wind upwards from the cobalt sea, you can still discover and experience the Corfu that so captivated the Durrell family.

Check out the White house in Kalami Bay, shown in this lovely this video:

ITV’s new drama series has been written by acclaimed screenwriter Simon Nye and stars actress Keeley Hawes in the role of Louisa. It is being produced by Sid Gentle Films Limited. 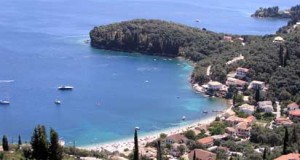